Results of Scientific-Technical Seminar in RDIRCS

The main purpose of this event was familiarizing the faculty of RCIRCS with the existing groundwork of the subdivision and the perspective research directions for the year 2017.

The deputy director of RDIRCS for scientific activities M.U.Medvedev in his report has demonstrated the promising developments of RDIRCS. The main stress was made on the tasks of group control and interaction of homogeneous and heterogeneous robot systems. 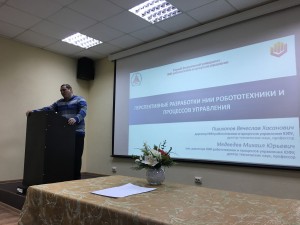 A special attention was paid to the perspective developments in the area of creation of an unmanned automobile. In his report the leading scientist of RDIRCS M.A.Beresnev has provided the information on the existing problems and set out several possible algorithms for solution accounting for the existing groundwork of RDIRCS.

Progress reports concerning the creation of a testing ground for robot systems were made by the leading scientist A.U.Kulchenko. The purpose of this testing ground is to estimate and test the results obtained in RDIRCS during the works on the grant of the Russian scientific foundation “Development of theory and methods of creation of intelligent position-path control systems for vehicles under the conditions of uncertainty” in 2014-2016. 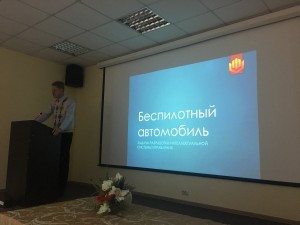 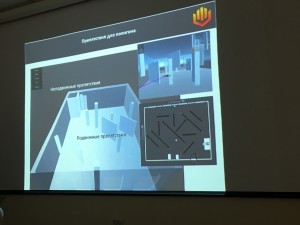 At the end of the seminar the reports were presented concerning the robotics contest. The leading scientist V.V.Pivnev presented the results of successful organization of the competition on robotics within the scope of the All-Russian engineering festival that joined the students of various Russian colleges and high school students from Rostov region and Krasnodar Krai.

The contest was performed in 4 nominations “Robots Dancing”, “Maze”, “Trajectory”, “Sumo”. More than 90 young engineers (54 students of Russian Colleges and Universities and 44 high school students of Rostov region and Krasnodar Krai) have tried themselves as designers and programmers of modern robotic systems. 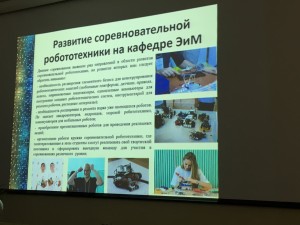 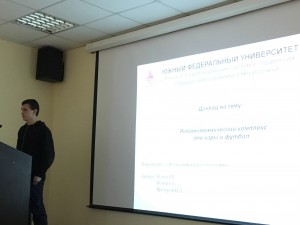 Students of the department of Electrotechnics and Mechatronics (R.I.Polev, G.A.Popov, N.A.Prokhorov) have demonstrated their achievements in creation of robotic complex for football game.

Students of the department of Electrotechnics and Mechatronics (R.I.Polev, G.A.Popov, N.A.Prokhorov) have demonstrated their achievements in creation of robotic complex for football game.
14.12.2016By Ярослав МеханиковNews